Amy has been a wonderful yoga student to practice with since well before her first baby.   Towards the beginning of her second pregnancy, she came to me after class and said, “Thanks to your resource guide, I’m on a whole new path!”   Her confidence then was so helpful, because as her due time approached, memories of her first pre-term birth surfaced.  She needed to trust in all the work she’d done leading up to then to navigate being further along in pregnancy than she’d ever been before.   Here’s her story, in her own words.   (Text in bold is my emphasis).

At the beginning of my second pregnancy I decided I would focus my yoga practice on breath work and listening to my body.  I knew from my first pregnancy that as my body grew and changed I would no longer be able to work my body in the same way as I normally do in my yoga practice. Therefore, I decided to concentrate on Pranayama, which is something I’ve always known is important but it’s never been my main focus. Throughout my pregnancy, I was amazed that any time I felt discomfort from sitting or my day-to-day activities it was never anything that 10-20 minutes of pre-natal yoga couldn’t fix. Even at 39+ weeks I felt great.

From the beginning of my pregnancy I felt pretty sure I didn’t want an epidural this time.  In my first pregnancy I considered natural childbirth but had not made a decision on the matter when I went into pre-term labor.   For this second pregnancy, knowing that Barrett had successfully had a natural childbirth experience, I asked her if she had any book recommendations on the subject.  She sent me her prenatal resource list and the book I read (and loved) was “Birthing from Within” by Pam England. The philosophy of this book fit very well with my own.  It states “labor is hard, it hurts, and you can do it.” Two of the key pain coping techniques in the book are breathwork and inward focus, both of which I was already practicing in my daily yoga training.

I went into labor at 3 am on June 27th, 2013.  My contractions began as strong menstrual cramps about 8-10 minutes apart.  At this point I called our doula, Maria Dolorico.  She said to wait until they were 5 minutes apart then call her and head to the hospital.  Ryan and I decided to get up, get dressed and eat breakfast. By 4 am we called Maria and our OB and headed to Brigham and Women’s hospital.  I had my husband Ryan park at the parking deck because I wanted the short walk outside.  It was slow because I had to stop for each contraction, but we finally made it to OB admitting. Maria met us there and we all walked up together to Labor and Delivery.

In triage I told the nurse I wanted natural childbirth and she was very supportive of me and my decision and encouraged me to keep moving and rocking my hips. She checked my cervix, found I was 5 cm dilated, and took a 20 minute read on the baby’s heart rate and my contractions.  Those were the only medical things they did the whole time. Ryan and Maria met me in triage and about 5 minutes later I realized breakfast was a bad idea.  It all came right back up and Maria told me the grosser the labor the faster it goes.

From triage we walked to my delivery room. The handrails on all hospital walls were my friends during the walk.  With every contraction I stopped and held the rail swaying my hips until it passed.  Ryan and Maria would press on the sides of my hips during each one, which eased the pain.  Once we made it to the room Maria asked if I wanted to get in the shower and said I was probably at transition.  The warm water flowing down my back felt wonderful and helped ease the pain.  The handrail again was my friend and I held it throughout each contraction and rested on it in between.   They came in waves at about 2 minutes apart then 1-1.5 minutes apart.  Ryan was behind me the whole time pressing my hips together through each contraction.

Throughout my labor I had been most comfortable standing but by this point I was getting very tired. Maria noticed this and asked if I wanted a stool to sit on which was the perfect suggestion.  I sat, still holding the handrail, resting my head on it between contractions.  By the end what I really wanted was to sleep between the contractions but the time was too short.

The next thing that happened was an involuntary push during the contraction.  At this point Maria suggested I get out of the shower, she and Ryan dried me off and put on my gown.  Once dressed all I could think about was getting to the bed and laying down on my side.  It’s amazing how my body knew how I should deliver; there was no decision-making happening.  When the next contraction came I was in the bed on my side.  Again the involuntary pushing ensued and I felt my water break.  I also heard the nurse say “Don’t push Amy, don’t push.”  I turned to him and said, “I can’t not push.” I later found out the doctor wasn’t yet in the room.

The delivery was quick.  1-2 contractions and the baby’s head was out.  At that point the doctor said “Amy, keep pushing”.  It was very odd trying to push without a contraction behind it.  I felt I had to look very deep into my body to find the muscles and push the baby out, but I was successful. Later my husband said the cord was around his neck and that’s why the doctor wanted me to keep pushing. Alex Edward White was born at 6:51 am weighting 7 lbs. 10 oz and 20 inches long.

Once he was out they placed him on my chest and checked his vitals from there.  It was a very different experience from my first delivery where they whisked Anderson off to the NICU.  After they stitched me up, which felt worse than the delivery itself, they left us alone. Alex was alert and nursing within 20 minutes of the delivery and the first moments Ryan and I had with him were peaceful and precious. It was a wonderful experience. 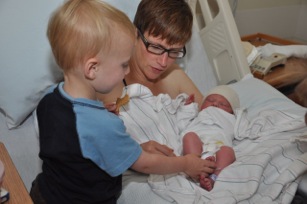