I’m starting a new blog series of more in-depth birth stories from some of my yoga students.    I think there needs to be more positive stories out there in the world about birth, so that’s the aim here.

We’re starting 2013 off with a birth story that happened this fall from a strong yogini Angela, and her partner Nathan.  Angela and Nathan are amazing – check out Angela on her website.  Here’s their birth story in their own words (emphasis is mine).

As a longtime yogini, I wanted to approach birth by being open and inquisitive about my changing body.  Some fears and doubts crept up along the way, but I wanted to feel strong and empowered throughout the process.  Early in my pregnancy, I recall looking through, “Preparing for Birth with Yoga” by Janet Balaskas.  The illustrations of a woman giving birth seemed surreal to me and I mused that I couldn’t imagine ever getting to that point.

Over many months of pregnancy and taking prenatal yoga I became more and more ready and actually excited for the birth experience!  Throughout my entire pregnancy I can honestly say yoga was my stronghold.  In fact, my husband Nathan and I found out we were pregnant in the midst of our yoga teacher training!  I continued to practice yoga every single day and remained active throughout—right up through early labor.

Yoga and pranayama (breathwork) helped me to stay grounded when I would feel anxious and worried, and brought me back to my center when I felt out of control.  I remember three very key times during pregnancy when I had A-HA yoga moments.   One was during savasana when I was very early pregnant and not feeling well.  I remember feeling scared about being pregnant and worried that I might unintentionally hurt the baby by practicing yoga and being too active.  The teacher mentioned setting an intention and I remember setting the intention that I was safe in my body, which really helped me relax and acknowledge that my body would know what to do.   The other times were late in pregnancy.  During a centering the teacher said to trust our bodies and that all the knowledge we needed to birth our babies was inside of us.  That really resonated with me and helped me to feel so empowered!  The third time was while squatting on a brick and practicing shifting between complete engagement (lion’s breath) and total release (softening completely between each breath) just as I’d need to do during each contraction during labor.

An aside from Nathan: Throughout pregnancy, Angela certainly had moments of anxiety and strong emotions, which were fully expected and respected. Also being a yogi, I knew of the powerful aspects of yoga that could help in times of anxiety and stress, and regardless of situation.  A very useful technique which many yogis use is mantras or affirmations.  So, very early on in pregnancy, I encouraged Angela to develop a mantra that she spoke nearly every night before bed, when emotions tended to be highest.: “Nathan loves me, He’s going to take care of me, I’m going to do great!” She repeated the phrase several times until she was fully convinced of her affirmation even in the hardest times.  Though I can never really know what was going on inside Angela’s body and mind on the day she gave birth, I can guess that the mantra had a positive effect.

At 38 weeks along, I walked into my weekly prenatal yoga class feeling like I was really ready to be done with being pregnant.  Barrett encouraged me by saying feeling this way was good and would help my body prepare to birth my baby.  However, I was in that birth window where it could happen anytime over the next 4 weeks. It was so hard to be patient after waiting so long!

I took this time for myself to have a pedicure, get a prenatal massage and just nap as much as I could.  I knew I’d be nurturing my baby soon enough, so I am grateful I took that time for self-care.  In the two weeks before giving birth, I was noticing more and more contractions and my cervix was dilating, which was exciting, but still there was no way to know when it would happen!  On Aug 31, there was a surprise baby shower for my friend that I was really looking forward to attending.  There’s an old wives tale that spicy foods bring on labor, so the hostess insisted I try her chocolate chipotle cake.  I figured it was worth a try and the cake was delicious!  Nathan and I called it an early night and it was a good thing because sure enough at 5:45 am the following morning things started to really change significantly with my contractions!

I cancelled all of my plans that day and stayed home.  I knew it could be a long road ahead so I ate nourishing foods and switched between passive and active activities as the day went on.  Actual napping was difficult because the cramping would wake me up with every contraction, but I managed about an hour of sleep during the day.   I walked around the house, did gentle yoga, breathing and stretching and made sure all of our hospital bags were packed and ready.  I started to really tune in internally and tune out everything else.  Surprisingly, social me had no desire to call family or friends– I simply wanted to focus on myself and the process of childbirth.

I found the yoga ball really helpful and spent a lot of time sitting on it and rocking my pelvis.  I never stayed in any one position longer than 10 min.  As the evening went on I called the midwives a few times for reassurances and to ask questions that arose, which was really helpful and helped me feel confident that I was on the right track.  I knew when I was supposed to go to the hospital (contractions that were 5 min apart, 1 min long and lasting an 1 hour) but my contractions weren’t ever quite that consistent.  They were definitely intense but fluctuated between 2 min and 7 min apart.  Nearly 12 hours later, I got in the bath and poured warm water over my belly and back during contractions. The water felt great and actually slowed labor a bit, but as soon as I got out of the tub things really kicked up.  Nathan was amazing at giving me lots of hip squeezes, low back massages and taking care of everything around the house so I could just focus on giving birth.  I spent a lot of time on hands and knees and doing positions that allowed my lower back to relax and found sounding techniques to be really helpful in terms of diffusing the strong sensations.

Finally, a little before 11 pm we were on our way to the hospital!  We forgot the main entrance was locked after hours and had to drive around to the ER entrance.  By this time I was having contractions 2-3 minutes apart while Nathan had to run in to make sure where we parked would be OK for the time being.  It felt like forever as I waited in the car repeating my mantra, “I’m OK, I am safe, I’m OK, I am safe.”

Once we made it up to labor and delivery we happily learned I was already 6 cm dilated!  Things were progressing at a rapid pace.  We went right to the room to have the fetal monitor connected to check the baby’s heart rate.  My contractions were very fast and intense and I had to keep moving and walking and shifting my pelvis for any relief.  The baby’s heart was really strong and the nurse said I could get in the tub.  No sooner did I get in the tub, I felt a very strong urge to push and bear down.  The midwife wasn’t sure I could be ready so quickly, but said it could be possible.  Sure enough she said with amazement I was at 10 cm already and it was time to push!

It took awhile to get the hang of this sensation.  I tried the birthing stool for a while and found it really tiring.   Nathan supported me by breathing with me and staying right by my side.  My midwife and nurse were a wonderful blend of calming presence and coach.  My body felt like an inferno and cold washcloths on my face and neck really helped.  I then switched to kneeling on the bed with my arms supported, but found this terribly exhausting too.  Sidelying on the bed was suggested so I tried that position and really liked it, which surprised me because I thought I’d like squatting or hands and knees better.  Also what surprised me was that I had to actually hold my breath (rather than exhale) to push through the sensation of pushing out my baby.  All along they kept saying they could see the amniotic sac starting to come out with each push.  Suddenly, the sac burst like a water balloon with a loud pop!  I remember wondering briefly how long I’d have to push but I quickly pushed that thought aside and turned my attention back to my body and the moment and staying focused on the sensations happening right now because that was all that mattered.  I noticed the midwife and nurse gowning up and figured it must be close!

With a very intense burning sensation and one final strong push, our son’s head of dark hair emerged.  With the next push his body came out and I exclaimed, “My baby!” as they put him on my chest and he let out a huge wail!  Surya Alexander Gabor was born at 1:47 am on Sunday, September 2.  He weighed 7 lb 9.7 oz and was 20 ½ inches long.  Nathan noticed that he and Surya shared the same exact foot shape, and if you know Nathan from yoga, you’ll notice he has very distinct feet.  We jokingly call it the monkey-claw because of the unusually large space between his big toe and first toe. 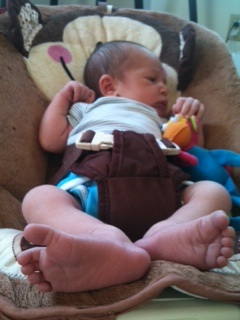 I truly felt like a super hero after giving birth!  A very, very tired and euphoric super hero that just ran a marathon. I believe yoga helped me to stay in tune with my body and ride every wave of sensation recognizing it as energy and aliveness rather than something to fear.   Being strong, prepared and confident in my innate ability to give birth created a very positive and empowering experience.