It’s that time again – more yoga babies are in the world, and they’re cuter than ever

Angela A., from Black Lotus and The Breathing Room,  had baby boy Surya Alexander on September 2.   He was 7lbs 9oz. and I’d love to share what she wrote a few days after her birth (emphasis mine):

“I just wanted to pass on a little note to say thanks for all the wonderful prenatal yoga classes.  My birth was such an empowering and positive experience no doubt because of a strong yoga practice and the excellent support of Nathan!  I felt really strong, confident and powerful and really found the sounding techniques to be helpful. 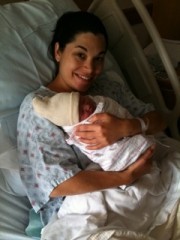 Yusyani S., from Black Lotus and the Breathing Room, had baby girl Marjorie Indra on September 5.   She was 8lbs. 3 oz. 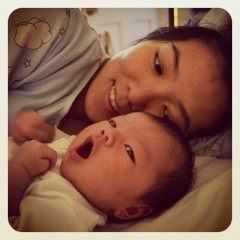 “Looking back on the pregnancy, I’m extremely thankful I practiced yoga up until the very end. The most useful thing for me was drishti.  It’s when we focus on a spot in the distance and use that for balance, concentration and centering. That was absolutely essential to getting through the pushing, which at the time felt like it went on forever.”

Maggie E. from O2 Yoga, welcomed baby boy Rahm on September 17.   Rahm was in the breech position, so Maggie had a Csection.  She writes:

“Prenatal yoga was essential to my ability to stay calm throughout the surgery and immediate recovery. And now that I’m up and starting to move again, I am so grateful for the extra strength and focus I gained in your classes.” 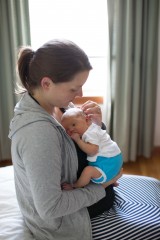 Annie M. from Black Lotus and the Breathing Room had baby boy Charlie on September 20.  He was 8lbs. 4 oz. 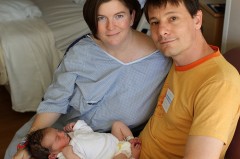 Charlie and his parents!

“Labor and delivery went very well and Liv is doing great! My recovery has been fast and amazing as well. All that exercise and yoga makes such a difference!” 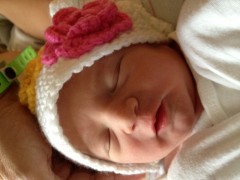 One Response to “September Yoga Babies!”